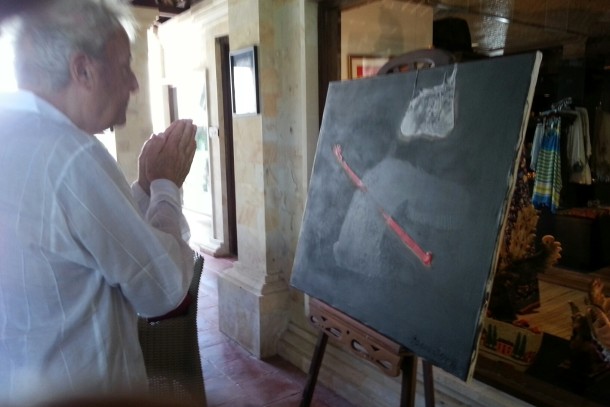 “Om Swasti Astu” Dr. Eckhardt whispered. “I’m going to die, so I hand over this painting to my homeland Peliatan who always be my spirit” he said with tears.

The story behind 1981 I decided to move to the city of Cologne, when my partner, Donata Dengler who was pregnant with our first child, confirmed that she didn’t want to live in Amsterdam nor Berlin.As a young artist, who was still struggling for bread and butter, moving to another city had never been easy.

Before leaving for Cologne, I contacted my network first. Frau Dr.Juta Beck, my collector in Berlin, would help me by introducing Dr. Henner Eckhardt, her college friend in Munich who’s also an Indonesia enthusiast.

So I immediately contacted him. His voice was very friendly and we had an instantly pleasant conversation. Dr. Eckhardt passionately shared with me his traveling experience to Indonesia and I could feel his love of Bali.

Through him I was able to get in contact with Heiner Jachertz, a property entrepreneur in Cologne, which kindheartedly offered me an affordable apartment. I signed a one year contract and Mr. Jachertz told me to bring the down payment of DM 900 two days later to his office.

I was truly delighted to be able to get a nice place so quick. Suddenly my stomach started growling. So I stopped to buy a Curry wurst at Imbiss for DM 3.10. As I opened my wallet I found only DM 200, -. Oh dear, how on earth I would be able to pay the down payment rent ?

I contacted some of my Collectors in Hamburg, Berlin and Amsterdam to offer them my works. Unfortunately only Frau Achterberg, a Collector from Berlin who’d willing to take my sketch for DM 500,- Over the night I was confused : ” Should I call Dr. Eckhardt or not?”. So I started to count my my buttons: “… Call him … don’t call .. call him.. don’t call… “, til the last one, my lips muttered: ” Call him …”.

The next day, I called Dr. Henner Eckhardt in Munich and conveyed my problems. He responded spontaneously: “Just give me your account number. Before I go to the clinic, I’ll stop by the Bank and will transfer you DM 1.500, -” I was surprised and so thrilled, that tears came down. “But we’ve never met in person” I said a little hesitant. “Ah, Frau Juta has told me a lot about your work. I will go to Cologne in the upcoming 2 or 3 months. I’ll stop by at your place to pick one painting” Dr. Eckhardt answered me.

Dr. Henner Eckhardt appeared in my apartment three months later. He selected one painting which medium is acrylic on canvas titled “Die Sehnsucht nach der Horizont”. Since that we have a close friendship, even to this day. About one year ago Dr. Eckhardt, addressed his illness. He had just gone a surgery. In our conversation, he would always express his desire: “Before I die, I wanted to reward your painting to the island of Bali that I always love for. That painting should be in Ubud Peliatan, because there I felt the vibrations of my second homeland! I will talk to Agung Rai about this. ”

A few weeks ago Dr. Eckhardt called me again: “Teguh, Agung Rai has agreed and was happy to hear my idea” and then he continued: “I’ll talk to my doctor for his permission to let me fly to Bali so I can hand over myself the painting to the ARMA Museum”.