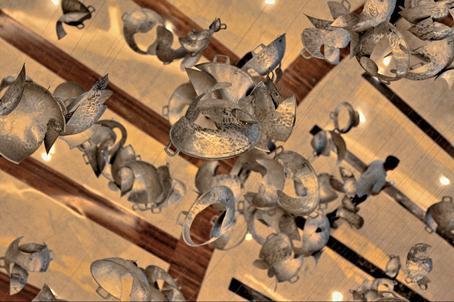 “Wok with Me” a kinetic mobile installation consisted of 500 woks.

“In 1978, I brought a wok to Berlin,” Indonesian artist Teguh Ostenrik recalls his days as an art student in Germany. “I invited my friends to my house and cooked nasi goring. That time when I used the wok, all my friends watched that genius wonder from Asia. Now everybody in Europe has a wok in the kitchen.”

The versatile round-bottomed cooking vessel was first used by the Chinese to stir fry noodles, stew vegetables, make soups, etc. The Chinese brought the wok as they migrated to or traded with their neighbors in East and Southeast Asia who no sooner adopted the big round pan, which evenly spreads and radiates heat back to its center, to concoct new dishes that later became national and regional cuisines.

The great diasporas of Asian peoples resulting from political disruptions in the last century brought the wok to different parts of the globe. Today, it is no longer just limited to Chinatowns and Asian restaurants, it has found its way in almost every kitchen around the world.

The wok has thus become a cultural icon of Asia. It symbolizes the globalization of Asian culture long before the onslaught of a more homogeneous industrial Western popular culture.

Teguh Ostenrik finds in the lowly wok a signifier for that which brings Asian peoples together. Like how it inspires the mixing of culinary styles, the wok represents the first multiculturalism. Today, this Asian heritage is in constant danger of being lost to a homogenizing global industrialism.

“We need to be reminded of the importance of small things around us that we normally take for granted: clean water, clean air, food in our meals,” he said. “Just recently, the United Nations warned of looming worldwide food crisis in 2013. To preserve and even provide a better world for the next generation, we have to take every little step that would matter in the long run. That’s what ‘Wok with Me’ is all about.”

In this recent work, Teguh suspends from the ceiling kinetic mobile sculptures made from deformed fragments of hundreds of woks. “When I cook, I notice how food covers only certain parts of the wok,” he said. “Then when I stir it, I am struck at the dynamic patterns created by the movement.”

This leads him to deform and cut up the wok. He drills perforations into the broken pieces of the pan and weld them together to produce new yet familiar images. Thus the deformed and broken woks have been detached from their initial function. Instead of the soot-covered greasy cookware in the smoky kitchen, we now see metallic fishes, butterflies, flowers and other figures shining like ethereal creatures above us.

By installing them above our heads, the artist wants to put them in a “sacred” place. Thus Teguh deconstructs the binaries of beautiful/banal, sacred/profane implied in the image of the wok. In effect, the artist retrieves the wok from its former place in the unsightly kitchen and literally puts it in lofty position at the exhibition place.

It is disorienting to see the wok not from the usual higher position of someone using it. But freed from utility and now flying free in the virtual cloud, we are thus reminded of our own state of being mere instruments, our triviality and ephemerality.

The sight of the commonplace now transformed into creatures of some divine realm is supposed to occasion a rediscovery of our own potential to transform and elevate ourselves.

You need targeted traffic to your website so why not get some for free? There is a VERY POWERFUL and POPULAR company out there who now lets you try their traffic service for 7 days free of charge. I am so glad they opened their traffic system back up to the public! Check it out here: http://nsru.net/138e